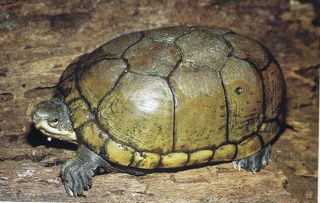 DescriptionMost kinosternids are small turtles, 10-15 cm (4-6 inches) in carapace length. The highly domed carapace has a distinct keel down its center. The genus Staurotypus gets much larger, to 30 cm (12 inches). Females are generally larger than males, but males have much longer tails. Kinosternids can be black, brown, green, or yellowish in color. Most species do not have shell markings, but some species have radiating black markings on each carapacescute. Some species have distinctive yellow striping along the sides of the head and neck.

The musk turtles are so named because they are capable of releasing a foul smelling musk from glands under the rear of their shell when disturbed. They are native to North and South America.

DietAll members of the family are carnivorous, feeding on crustaceans, aquatic insects, mollusks, annelids, amphibians, small fish, and sometimes carrion.ReproductionKinosternids lay approximately four hard-shelled eggs during the late spring and early summer. After hatching, some species overwinter in the subterranean nest, emerging the following spring. Some adults also spend the winter on land, constructing a burrow with a small air hole that is used on warm days.

Kinosternids contain the only species of turtle known, or at least suspected, to exhibit parental care. Studies of the yellow mud turtle in Nebraska, USA, suggest females sometimes stay with the nest and may urinate on the eggs long after laying, to either keep them moist or to protect them from snake predation (by making them less palatable). 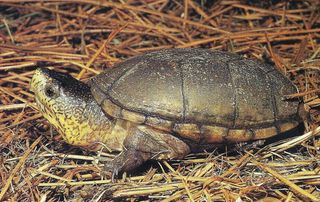 The family Kinosternidae is a moderately sized family of chelonians. There are two subfamilies, the Staurotypinae and the Kinosterninae, each of which have two genera. The genera of the Staurotypinae, Claudius and Staurotypus, are endemic to central Mexico and range south into northern Central America. The Kinosterninae genera, consisting of Kinosternon and Sternotherus, range more widely, occurring from southern Canada through much of South America.

The turtles in the subfamily Staurotypinae are all moderately large musk turtles. All three turtles have three keels running the length of the carapace. Their plastron is small and narrow, cruciform in shape, with seven or eight scutes. Some researchers regard the Staurotypinae as distinct enough from the Kinosterninae to warrant elevation to full family status, as the family Staurotypidae (Bickham et al., 1983). They base this elevation on chromosomal variations, but a number of other studies on morphological variation within the Kinosternidae support the current system.

The genus Claudius contains only one turtle, Claudius angustatus. The plastron of the Narrow-bridged Musk Turtle has seven bones, unlike any other turtle. Another unique feature is the presence of two cusps on the turtle's upper jaw.

Two genera are present in the subfamily, the genus Kinosternon (mud turtles), with at least fifteen species and a number of subspecies, and the genus Sternotherus (musk turtles), with four species, one of which has two subspecies. Musk turtles are native to the United States, with one species (S. odoratus) ranging up into Canada. Mud turtles are more widely dispersed, with species found from Connecticut (K. subrubrum) south through the southern and central portions of the United States, through Mexico and Central America, and entering South America as far as northern Argentina (K. scorpioides).

In recent years there has been a large amount of scientific debate over the degree of separation within the Kinosterninae. Some researchers believe that the two genera should be combined into one genus, Kinosternon. Others favor maintaining the split. The most recent controversy arose in 1986 when Seidel et al. published a report on a detailed comparison of the variation in thirteen protein complexes in 18 species within the family Kinosternidae. The variation among the thirteen proteins was not great, and analysis of the data supported many of the conclusions of other researchers based on morphological data (such as Bramble et al., 1984) and karyotyping (Sites et al., 1979). However, based on their data, Seidel et al. argued that two members of Kinosternon, K. baurii and K. subrubrum, were more similar to members of Sternotherus than to species of Kinosternon located in Central and South America. Sites et al. had noted a similar result based solely on karyotypes of the various species, but did not suggest any revisions in taxonomy. Based on this relationship, Seidel et al. relegated Sternotherus to subgeneric status (i.e. Sternotherus odoratus becomes Kinosternon odoratum, etc.). A few years later, John Iverson published a work using a very large data set of variable morphological features (Iverson, 1991) to resolve phylogenies within Kinosternon and the possibly suspect Sternotherus. As he could find no unique character diagnostic for Sternotherus turtles, Iverson followed the taxonomy suggested by Seidel et al. Some authors also adopted the revised Kinosternon genus; others have remained unconvinced. In Ernst and Barbour's 1989 Turtles of the World, they included Sternotherus in Kinosternon. However, with the publication of the 1994 volume Turtles of the United States and Canada, Ernst, Lovich and Barbour question the split, wondering "why not relegate K. baurii and K. subrubrum to the genus Sternotherus rather than the four Sternotherus species to Kinosternon?" (pg 138). Obviously, the jury is still out on the status of Sternotherus.